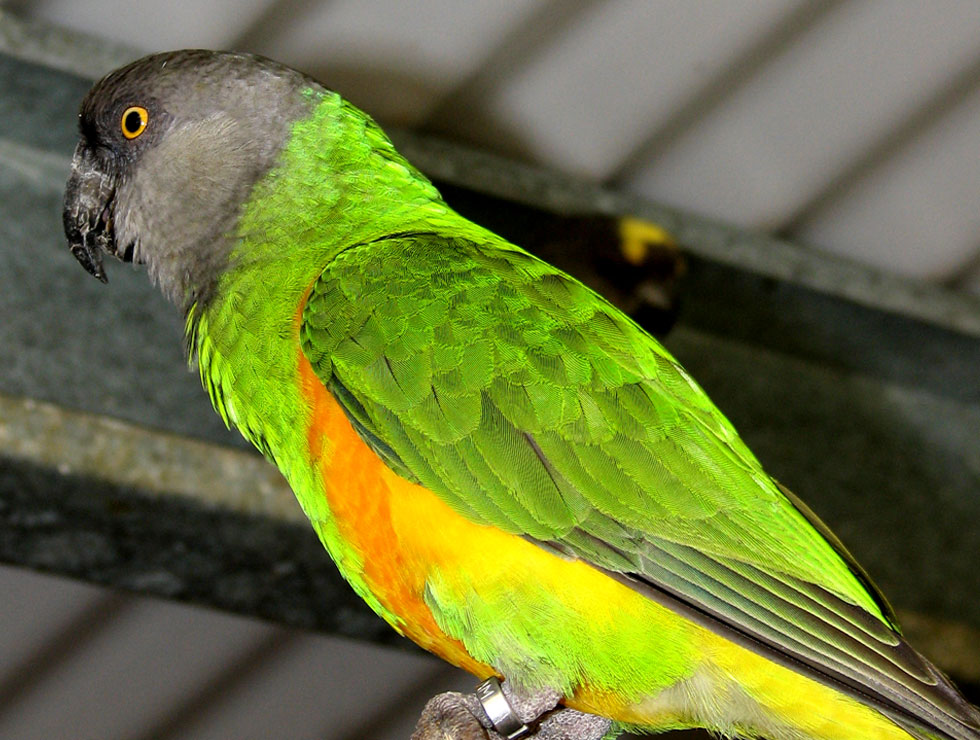 As their name implies, these birds come from Senegal but also Gambia, Guinea, Ghana and Cameroon. They were imported in large numbers in Europe, however they are little birds that remain in places where they grew, because of the food.

There are three species of Senegal parrots namely:

Poicephalus senegalus versteri: have a red belly and they are encountered from east Ghana to west Nigeria

Poicephalus senegalus mesotypus: with their orange belly they originate from eastern and north-eastern Nigeria, and can be encountered in northern Cameron or the south-west of Chad.

Their head is gray and down their throat they are colored in a light silver, the belly is colored in one of the colors called for by the 3 species, the tail has a dark brown tent and their green feathers of their feet look like grass.

Although it is relatively difficult to determine the sex of this species, here are some clues that can guide us: the shape of “V” on the chest is usually longer for females, reaching between the legs, and in males it stops somewhere in the middle of the chest.
The head and beak of the female are usually a little smaller than males
Under the tail feathers are mostly green in males and females completely yellow
Of course males are usually larger and heavier than females

They live in the wild mostly in forests and savannas on the edge. Senegal parrots are considered to be pest by farmers because they raid over fields of corn.
If they are kept in cages they should have a minimum of 50x50x70cm of space

There is very little information about what Senegal Parrots eat in the wild and that depends on the season probable but in captivity it is very important to feed them a mixture of seeds, sunflower, millet, barley, various nuts and peanuts, hemp seeds, peas, beans, grass seed, Indian sesame, fruits and vegetables like green beans, cucumber, beet, dandelion leaf, green corn, lettuce, green pepper, spinach, tomatoes, zucchini, carrots, pineapple, apples, bananas, oranges, plums, grapes, apricots, peaches, etc. the food must not miss to the parrot. Avoid giving them chocolate and avocado, those killed many birds.

It is known that these birds in captivity do not lay eggs until 3-4 years. Females reach maturity at the age of 2 and males about a year later. The nest is better to be a tree bark but if you can not make one you can make or buy one of standard plywood.
Nest must have a minimum width of 45 cm height and 20 to 25 entry hole should be 6-7 cm.
Usually the winter breeding period is from November to March
Generally the Senegal parrots lay between 2 and 3 eggs with a 3 cm length and a width of 2.5 cm.

The pups will not open their eyes out for 2-3 weeks; and the period in which they depend on their mother until after the 4th week as she provides the heat and of course the necessary food. The female will leave the nest very rarely during this time.

After 9 weeks after laying the eggs, chicks will begin to leave the nest and try to fly and
after 12-weeks they become independent of parents. 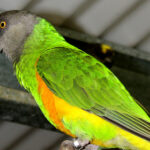 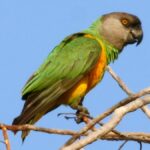 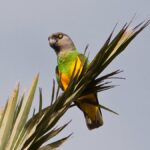 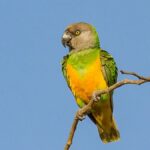